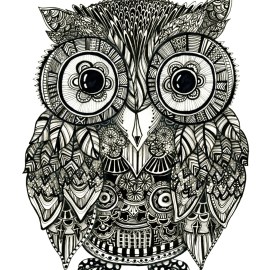 Zen philosophy plays a huge role in influencing the art of tangling. This is mainly because Buddhism has a strong regard for the sacredness of every sentient being on the planet. The term “sentient” refers to “possessing the capability to feel or perceive.” Based on this description, we can then say that on earth, sentient beings pertain to those creatures belonging to the animal kingdom, including human beings—all capable of showing emotions, thinking and sensing. Buddhism is the foundation that leads to the conception of Zen animals and their symbolic meanings.

Humans and animals are interconnected.
In Buddhism doctrines, it is believed that animals, including insects, bear the exact nature of Buddha, and therefore are sacred and worthy of respect. Buddha is the prime character in Buddhist religion. Since the word Buddha means the “enlightened one,” it is presumed that animals are also potential entities for enlightenment. Thus, Zen animals have emerged to refer to all living matters possessing such nature.

Based on these principles of Buddhism, animals and humans are seen as equal and that whatever moral laws linked to humans should also be applied to animals. For example, if it is immoral to kill a human being, it is also the same with taking the life of an animal whether it is a bird, a worm or an insect. Harming any living beings is therefore forbidden. If we are capable of loving human beings, then we should also be capable of doing the same to animals.

Reincarnation
Another point raised relating to Zen animals is the concept of rebirth or reincarnation. The doctrine embraces the notion that animals and humans reincarnate after death. This is why humans and animals are somehow interconnected to each other. In this sense, animals are thought to be your dead family member or relative, and a human being could be a certain animal in his past life. So if you see an animal, you are decreed to neither injure nor inflict damage of any type on that creature for it might be your deceased aunt, cousin, or parent being re-created or re-awakened.

Zen Animals are symbolic
The Buddhist attitude towards animals is overwhelming. Buddhism perceives man as cruel and selfish for violating the rights of many animals to fully enjoy their dwellings on earth. Humans threaten the animals’ existence by killing and consuming them as food. This is strongly in contradiction to Buddha’s teachings. Buddhism particularly believes in animals as representation of human virtues, particularly the nature of the Buddha. In Zen principles, animals like the lion, elephant, peacock, horse, garuda are the commonly known animals that bear the wisdom and characteristics of the Buddha. By using the Zentangle method, these Zen animals are given much more value as they are used as the main objects for tangling. A lot of creative tangled designs can be made through the images of these Zen animals.

Animals As Symbols in Buddhism

As previously mentioned, the Buddhists’ supposition that sentient beings hold the wisdom and nature of the Buddha gives way to the perception that animals are a source of good fortune, success and long life. This chapter elaborates the various Zen animals and their symbolism according to the Buddhist theory.

PEACOCK
Peacocks are beautiful creatures. The peacock’s colorful tail makes it a thing of wonder. People feel happy seeing a peacock spreading its tail. However, besides this unique prominent feature of the peacock, it also has another extraordinary ability; it eats poisonous plants without being affected by any of the lethal contents. Instead, the peacock becomes all the more beautiful and healthier after consuming toxic substances. In Zen philosophy, this exemplifies that the peacock is capable of turning “evil” into “good.” Also in life, the harm and pain we undergo serve as instruments that will bring out the best in us in the end. This Zen animal enlightens the world that there is hope and happiness after all the negativities and sufferings. This makes the peacock a symbol for wisdom and liberation.

LION
The stateliness of the lion often intimidates other animals. Several stories in literature name lions as the “king of the forest.” In a scientific observation, lions tend to live together in the form of clans. It is the lioness that does the hunting for food while the male protects his community from adversaries. This scientific fact alone provides the logic that the lion’s best attribute is bravery making it a symbol of protection and royalty in Buddhism. The lion also represents great pride and wisdom. This explains why many temples put lion statues at their doorsteps, entrance or gates.

HORSE
Even today, horses are used as vehicles for transport. Back in the ancient times, the horse was regarded as a powerful beast used by kings both as a protector and guide. A horse runs fast and swiftly as the wind and so it is a symbol of energy and labor in Buddhism. There were even several gods whose faces was that of a horse.

ELEPHANT
Elephants are special beings especially that Buddha himself, based on the accounts of Buddhism, was an elephant in one of his past lives. Physically, elephants are seen as strong and powerful considering its enormous size. That’s why it is considered as a Zen animal symbolizing mental and physical strength. In Buddhist stories, elephants are famous characters. The white elephant, for one, bears a significant role as a protector to whom royals rely upon during wars.

BIRDS
Birds are considered as Zen animals that represent freedom because of their ability to fly and spread their wings. Since birds devour worms as food, they are in control of all those sentient beings that crawl. A typical example of a Zen bird is Garuda known to be the “king of birds.” Garuda eats snakes, which is a symbol of hatred and jealousy. Garuda, being the snake’s nemesis, makes it an enemy of hatred and jealousy. When Garuda soars into space, it signifies openness and bears the sun’s energy that enlivens all other things on earth